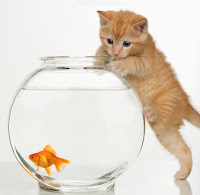 A crying child.  It's one of the most stressful sounds in the world.  In fact, they have found that a small child's cry is about 95 decibels: that's as loud as a street drill.  No wonder it induces immediate feelings of stress, anxiety, anger and helplessness.  Aghhhh!

Over the past few months, James has learnt to walk, as a result, he's into everything faster than I can react.  I've had far more practise walking, running and jumping than he has, yet he's still faster than me.  How's that?!  As a result, I can no longer protect him from the myriad bumps, knocks and falls.  The result?  Crying, punctuated by piercing screams, has become a daily, sometimes hourly, occurrence.  And I can feel my patience slipping, my frustration rising...

About a fortnight ago I decided 'enough was enough', the crying is likely to continue for the short to medium term, so I had better find a way to deal with it.  Crying is an alarm bell, so I've started using it as that: when I hear James cry, the first thing I do (when I remember) is breathe out, to still myself.  I try to use his cry as a wake-up call for myself, to remind me to become conscious, to come back into myself, to return from my thoughts and become fully present.

I will be the first to say this is not a perfect plan.  As I race to him as he's just fallen into a box, out of a box or over a box, I don't always remember.  But sometimes I do remember and when I do, I'm so pleased because I had turned a potentially negative reaction into a more peaceful response.

In order to try this at home, you don't need a screaming baby (but it does help!!), we can reprogramme our reaction to any source of stress: the phone ringing, the boss yelling our name, the rude driver who just cut us off... We have a choice, a small moment of opportunity, when we can choose to respond consciously instead of reacting blindly to life around us.

Posted by Jennifer Crokaert at 09:14 No comments:

I left the drying up towel in a ball on the kitchen counter.  Dirk pointed it out to me.

"No, I was just about to put it away properly.  If you'd only give me a break.  Why are you so perfect?"  I snapped back.
'I don't normally leave it there, why couldn't he give me a break?' I thought to myself.
I was not about to back down.  I was off...

In fact, I was lost, lost in defensiveness and self protection.

The next day, I looked across the kitchen and noticed the towel in a ball on the counter.  So I do do that!

But here's the rub.  We all have shadow sides, those parts of ourselves that are less loving, less than forgiving, less than kind.  It's a given, part of being human.  It's not the end of the world.  So why do I react so badly to getting it wrong, to having my shadow pointed out to me?  Because I've been brought up to see it as a personal failure.  It's normal to get it wrong from time to time.

What I've discovered is that beating myself up about being imperfect makes those imperfections more 'sticky'.  The more I beat myself up about them, the stickier they get and the longer they are a part of me.

This is subtle work.  I like to believe I'm a pretty good person.  I like to present that front to the world.  I get sticky around my own 'flaws'.  I don't even realise that I'm angry at myself for getting annoyed about the tea towel... yet again.  And so I get stuck, over and over and over again.  Until I don't.  Until the moment I notice myself getting annoyed, feeling embarrassed, feeling like I've somehow failed.  And from that point on, I'm not so reactive to my failing, I'm not so protective of my failing.  It's less sticky.  Gradually, it dissolves.  Perhaps it's not gone entirely, just no longer a source of anxiety and agitation in my world.
Posted by Jennifer Crokaert at 08:26 No comments:

No shadow in the dark

I've spent a lifetime trying to eradicate my shadow side.  When I couldn't erase it, I tried softening it, hoping I would one day evolve beyond it.  My success rate to date has been modest, to put it kindly.

This morning, I was let off hook.  I was listening to an interview with Deepak Chopra who said that the only people who don't have a shadow side are those in the dark!  So it's ok to be imperfect?!  You can tell this man isn't a Catholic!

What matters is accepting the shadow, rather than denying it.  The spiritual path isn't about becoming good, it's about becoming Acceptance.  Acceptance gives us a degree of distance, of detachment from ourselves, and it is in that tiny sliver of spaciousness divine transformation occurs.

It only takes this tiny shift for us to become aligned with the deep heartbeat of the Universe, which can then transform us and purify us.  The hard work is done for us; this explains why I haven't got so far with this endeavour over the past 20 years.  I was trying to do the impossible.  But it wasn't my job.

I'm not off to rob and pilage, but to begin the discipleship of accepting my shadow when it turns up, instead of beating myself up for failing yet again.

What a relief.
Posted by Jennifer Crokaert at 16:03 No comments: