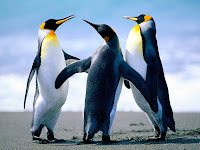 I have 'warts'.  Not the physical kind, but the less subtle form: little knots in my personality where I still get stuck.  Arguments that press my buttons, reactions that really annoy me, emotional blind spots, and habits that don't serve me but in which I still indulge...

As I was meditating this morning, and here I use the word 'meditating' in the loosest possible meaning of the word.  I was trying to, but I was so wound up about about an argument that I wasn't really meditating: I was just ranting silently to myself.

Very softly, without any conscious thought on my part, an image floated through my mind.  I saw a clenched fist being held away from me.  Rather than words accompanying the image, I had a sense of 'knowing'.  The clenched fist represented one of my own 'warts', a short-coming or 'weakness' that I have banished from my psyche, hoping that, if I leave it to shrivel and die in the cold, without any attention from me, I will be free of it.  The 'knowing' was that we cannot push undesirable aspects of ourselves under the table; we cannot ignore them and hope they will disappear.  What we resist, persists.

The 'knowing' suggested inviting these parts back in: acknowledging them and accepting them.  Loving them.  Not rejecting them.  It was suddenly obvious that rejection would heal nothing.  Love, on the other hand, could soften and transform those hard knots... those elements of myself that I've rejected... those characteristics, weaknesses and laziness-es that I feel let me down.

How?  Excellent question: I'm still wondering what the answer to that is myself.  But I'm willing to do this.

I'm willing to acknowledge that there are some aspects of my personality that I don't like.  I dislike how lazy and apathetic I've become since I've been pregnant; my lack of business ambition; my enduring sense of being a burden; my lack of tolerance with the Roman Catholic Church; my anger at the lack of compassion and consideration in society; my lack of boundaries... you see, there are quite a few.  And the 'splinter' I see in others, is a reflection of the log in my own eye.

My reaction to the parts I dislike is to ignore them; to try not to think about them.  I try to leave them 'out there'.  But they do exist.  And they are a part of me.  As much as the good stuff.  I can't split myself between 'Good Jennifer' and 'Bad Jennifer'.

Accepting the shadow side is the first step to integrating these parts into the whole: to understanding them in a wider perspective and to uncovering the hidden potential that they offer.  While I used to fear the less appealing parts of myself, I now realise that there is nothing to fear but fear itself.  After all, if I open a door into a darkened room, the light shines into the dark: the dark does not engulf the light.

That's the first step.   Only when I complete that step will the next step in the process reveal itself.
Posted by Jennifer Crokaert at 14:48